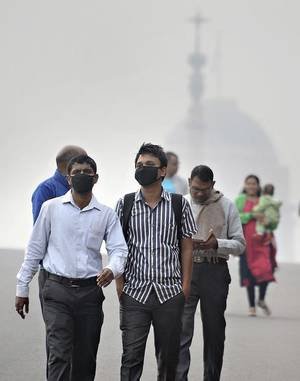 What began as a childhood observation for entrepreneur Tej S Bhansali, has turned into one of the most practical solutions for the air pollution crisis in Delhi.

“I was born and raised in Los Angeles, but I used to visit India, Mumbai, specifically through my childhood as the majority of my family is here. I always used to wonder why there is so much pollution in the country. After doing some research, I realized that most of it was because of the burning of waste products, including agricultural waste,” says Tej, talking post the Global Leadership Summit in the city.

“I graduated from the University of Southern California, studying gemmology. I joined my father in our family’s jewellery business with my sister. I realized I was not going to be contributing to society this way. It troubled me and I also wanted to find a solution to the pollution in India.”

After considerable research, Tej came across a technology that would allow agricultural waste to be turned into panels that could then be used for construction.

“There was just one company that was doing this, in the US, so we partnered with them and we are now doing it in India.”

Tej is now the Managing Director of Agriboard Industries (LLP), which is at a pre-operational phase, set to launch commercial production in April 2018. He is currently based in Mumbai.

“We buy agricultural waste from farmers across parts of North India, including Haryana, Uttarakhand and Punjab. We will transport it to our factory in Haridwar, where we have 10 days worth of straw at all times. We then produce CAF panels using custom-made machinery, through a heating and compressing process and then deliver them to developers and contractors. Everything from the machinery to the labour is done right here in India.”

The CAF panels are coated with an eco-friendly, water-based solution called Agri-seal, which makes them waterproof. The panels are also pathogen and fire resistant, sound proof, earthquake approved and have negative carbon footprint.

“We did fire-resistance tests in the United States, we are also certified by ASTM and ICC, which are part of international building codes. We will also do the necessary tests in India including BIS and IIT-Roorkee,” explains Tej.

“We have done an apple-to-apple comparison between our panels and conventional building materials. We found that our method is 30 per cent more cost effective. Since the panels are pre-fabricated, they save a lot on time and labour. With our panels, it is possible to build a 300 or 600 sq ft house in three days with three to five people. Considering all these factors, anywhere between 60 and 70 per cent of time is saved.”

The panels allow for easy installation of plumbing and electrical fixtures, he adds. And since the structure is well-insulated and is relatively air-tight, it also saves on electricity.

“We are mainly targeting the housing industry,” says Tej, which, according to a report submitted by a technical committee to the Ministry of Housing and Urban Poverty, is facing a shortage estimated at 18.78 million, as of 2012. The report also suggests that the lower income groups constitute 96 per cent off this deficit, considering the high cost of real estate in India (according to KPMG at NAREDCO’s 11th Annual Convention).

“We can build structures that are eight or nine floors high, after which the design has to be modified. The panels can also be used to build schools, hospitals, public restrooms, even military bunkers since the panels, according to a study done in the US, has some blast resistivity. They can be upgraded to build furniture or dustbins, at a later stage.”

And they offer a lucrative deal for farmers, in helping them resolve their debts as well as supplement their income from crops.

“Rice straw cannot be used as fodder, because it contains high amounts of silica. Farmers basically have no use for it, which is why they end up burning it. Selling the straw will offer them a second income and ease the burden of dealing with the waste.”

But there are challenges in the way, especially with supply and scaling. “One of the major challenges is the allocation of rice and wheat straw, both of which are abundant in India considering that it is one of the world’s largest producers of both grains. The challenge is in the allocation at the scaling stage, because there won’t be a tangible difference in air quality in the regions of Punjab, Haryana and Delhi unless we have over 20 factories.”

And so the next step is to start producing panels at the present factory and moving them in order to get the distribution channels going, before scaling up operations.

“That is why we are situated in Haridwar, near the rice bowl so we are close to the agricultural waste. We hope to help people clean up the air, offer good homes and help realize India’s vision of housing for all.”